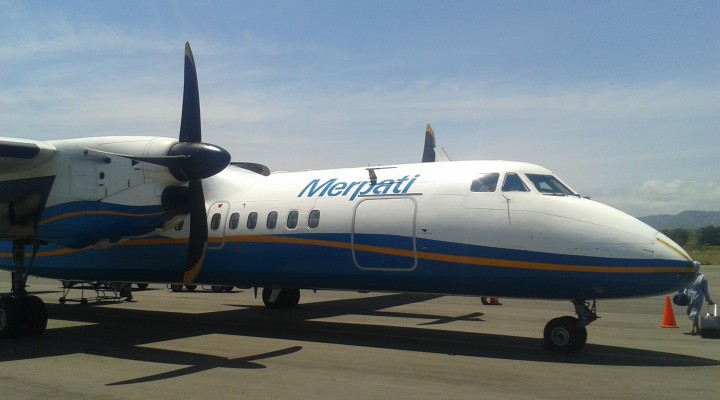 When the time had come to leave our little hideaway in Flores behind, we went by local bemo to Maumere to catch a Merpati flight. The usual hussle began, the bemo car driver decided on his own to drive us directly to the airport instead of stopping at his usual destination, the “Loceria” terminal. The bemo crew always has at least 2 persons, the driver and the moneyman. You could call em monkeyman, because they usually the stand outside of the car with only their feet just on the edge of the doorway in case the bemo is crowded or if they just feel like enjoying a cool breeze in their hair at high speed (Sometimes 3 or 4 people stand there while only holding on to the bemo with one hand). If you went to blend in with the locals, before you pay you need to get the lowest Rupiah bills you have, count them right and squeeze them tightly in your hand for the entire bemo ride. But to do so, you need to really crumple all the bills – together with the sweat of the abnormal heat this makes a nice wet bundle of worn-down something. Thats why most small bills you get here look like they have been chewed for hours before they are handed to you. If you are dissatisfied with the ride and are up for a rough dispute, its important to slam the bills on the ground, for example you want to pay less then the moneyman wants you too – the moneyman in this case usually starts yelling while not picking up the bills, or, he picks them up quickly only to throw them back at you. This can go on for minutes until either side just gives up completely annoyed. The good thing, if you are not up for a fight (and yes, we have seen fights over like 10 cents) but witness such hassle, to blend in you just need to watch carefully and do … nothing … or better said, enjoy the show.

Anyhow, even though we made it clear that we had no intention of paying for a special (and pricy) charter service, they refused to understand us and just went on driving – so in the end we bargained hard and so we paid only little more than with the usual extra motorbike taxi ride. The airport itself was a symbol for Indonesian negligence, although quite modern and in western look with polished materials everywhere, the only thing that remained working in the bathroom was one illuminated “fish tank” our of plastic above the urinal. The rest (aside of 2 not working fishtanks) was just wrecked. The soap dispenser did not have seen soap in years, the walls had cracks and became a shelter for many insects, and there was no water neither for the toilets nor the sinks, not even in the extra shared sinks outside. But as always if the floor is tiled, it is greatly polished and shining… and we witnessed how it was being polished again with great care while we were waiting – cause some bling bling on the floor, that’s what matters!

We were quite happy when we landed in Makassar after the partly bumpy propeller plane ride, only to discover that no Indonesian island is free of scumbags that just tell you one lie after another only to get you to book whatever service they offer you. The nice tourist information office guy in the airport resulted to be an agent that tried to stress us into an overpriced Tana Toraja visiting packet (including a funeral ceremony) while lying at the same time about the prices for public busses/guide costs and so forth. And none of the prices was for real, but even better, when we came back after studying the guidebooks one of his coworkers we haven’t met before just told us the same wrong prices, but this time even 30-50 % higher … no shame in that game?

When we left the luggage claim zone we were immediately surrounded by taxi drivers offering us transports, the pack of hyena could scent our money filled white tourist bodies and was going for the kill, at least the drivers were following us persistently and just wouldn’t accept a “NO”. Just the usual crazy which awaits you here in indonesia if you don’t have prebooked transportation. We spend the rest of this lovely day at the bus terminal in Makassar, bargaining the ticket price for the night bus to Rantenpao. Over bargaining we befriended the ticket vendor, a 21 year old girl, and got to know quite a few people since we hung out like 6 or 7 hours at this bus station. In any case, the kids were as usual quite interested in the white tourists, even sang for us – at night they would open up a little street shop and sell like so many others snacks and drinks to the few travelers. In the evening we even helped the bus-ticket vendor selling three more tickets to three Spanish travelers, with whom we ended up spending some great days in Tana Toraja. 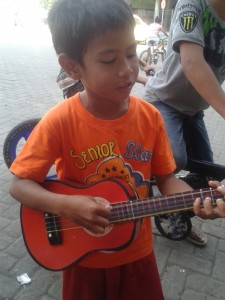 All the hassle from this exhausting long day was forgotten, the minute we climbed into the rather vacant overnight bus and fell asleep quite quickly. The road was rough though and sleep was not tight

Want to tell your friends about us?

We are finally updating our blog!

After so many month of being inactive, we finally found the courage to dig deep back into our notes, diarys and foto albums. Thanks to your nice feedback regarding our blog, we decided to finish what we have started :-)

Being on the road for so long was just such a wonderful experience! Thinking back to that time of freedom and ease was way to painful for us... for a long time. But motivation has kicked back in, thus you can look forward to more of our stories from the far east.

Best Wishes to all of you, Erik and Amaia

Are you looking for a specific topic?